Buying a home can be a really exciting time, so the last thing we want is for you to be hit by any surprises. Let’s take a look at five things to keep in mind before you write an offer.
Click HERE To Read More

Every year since October 2008 it’s become more and more difficult to obtain a mortgage. The government claims to be casting a safety net over the Canadian housing industry via stiffer mortgage regulations. What do you need to know to help prepare yourself for a home purchase, refinance, debt consolidation, or even a simple renewal? Well the biggest item I cover on a daily basis is preparation.

This morning, the Canadian Real Estate Association (CREA) released its April national real estate statistics showing home sales fell by 1.7% from March to April from the record sales pace set in March. Sales declined in two-thirds of all markets, led by the Greater Toronto Area (GTA) and offset by increased sales in Greater Vancouver and the Fraser Valley. Sales in B.C. had slowed even before the August introduction of the 15% tax on foreign purchases. That slowdown has now dissipated as the Vancouver housing market apparently has bottomed.

Since last month’s release of CREA housing data, the Ontario government has introduced a similar 15% tax on foreign purchases in the Greater Golden Horseshoe (GGH), which is Canada’s largest urbanized area centred on the City of Toronto, where house prices have risen very sharply over the past decade and spiked in 2016 (see map below). This has caused great concern at all levels of government. The Bank of Canada has repeatedly warned that the housing boom is unsustainable and household debt levels relative to income at record highs is a threat to financial stability.

Not seasonally adjusted sales were down 7.5% year-over-year, with widespread declines led by the Lower Mainland of British Columbia, where activity continues to run well below last year’s record levels. Sales in Calgary and Edmonton are up from last year’s lows and are trending higher in Ottawa and Montreal.

According to Gregory Klump, CREA’s Chief Economist, “Homebuyers and sellers both reacted to the recent Ontario government policy announcement aimed at cooling housing markets in and around Toronto. The number of new listings in April spiked to record levels in the GTA, Oakville-Milton, Hamilton-Burlington and Kitchener-Waterloo, where there had been a severe supply shortage. And with only ten days to go between the announcement and the end of the month, sales in each of these markets were down from the previous month. It suggests these housing markets have started to cool. Policy makers will no doubt continue to keep a close eye on the combined effect of federal and provincial measures aimed at cooling housing markets…, while avoiding further regulatory changes that risk producing collateral damage in communities where the housing market is well balanced or already favours buyers.”

New Listings Shot Up in April

The number of newly listed homes jumped 10% in April, led by a 36% surge in the GTA. Housing markets in the GGH also saw similar percentage increases. Supply shortages have been a major issue depressing sales activity and raising prices, especially in and around Toronto and parts of B.C.

The jump in new listings and the decline in sales eased the national sales-to-new listings ratio to 60.1% in April compared to 67.3% in March. The ratio in the range of 40%-to-60% is considered generally consistent with balanced housing market conditions. Above 60% is considered a sellers’ market and below 40%, a buyers’ market.

The sales-to-new-listings ratio was above the sellers’ market threshold in about half of all local housing markets, the majority of which continued to be in British Columbia, in and around the Greater Toronto Area and across Southwestern Ontario.

Number of Months of Inventory

There were 4.2 months of inventory on a national basis at the end of April–up slightly from 4.1 months in March when it fell to its lowest level in almost a decade.

Although new listings surged in the Greater Golden Horseshoe, inventories remain very tight across the region. Ontario’s recent changes to housing policy were announced late in the month, so their full effect on the balance between supply and demand is yet to be seen.

This price index, unlike those provided by local real estate boards and other data sources, provides the best gauge of price trends because it corrects for changes in the mix of sales activity (between types and sizes of housing) from one month to the next.

After having dipped in the second half of last year, home prices in the Lower Mainland of British Columbia have been recovering and are up from levels one year ago. They are now achieving new heights or trending toward them (Greater Vancouver: +11.4% y-o-y; Fraser Valley: +18% y-o-y).

Meanwhile, benchmark home price gains remained in the 20% range in Victoria and elsewhere on Vancouver Island. Price gains were in the 30% range in Greater Toronto and Oakville-Milton, and ranged in the mid-20% in Guelph.

The national average price continues to be pulled upward by sales activity in Greater Vancouver and Greater Toronto, which are two of Canada’s most active and expensive housing markets. Excluding these two markets from calculations trims more than $150,000 from the average price. 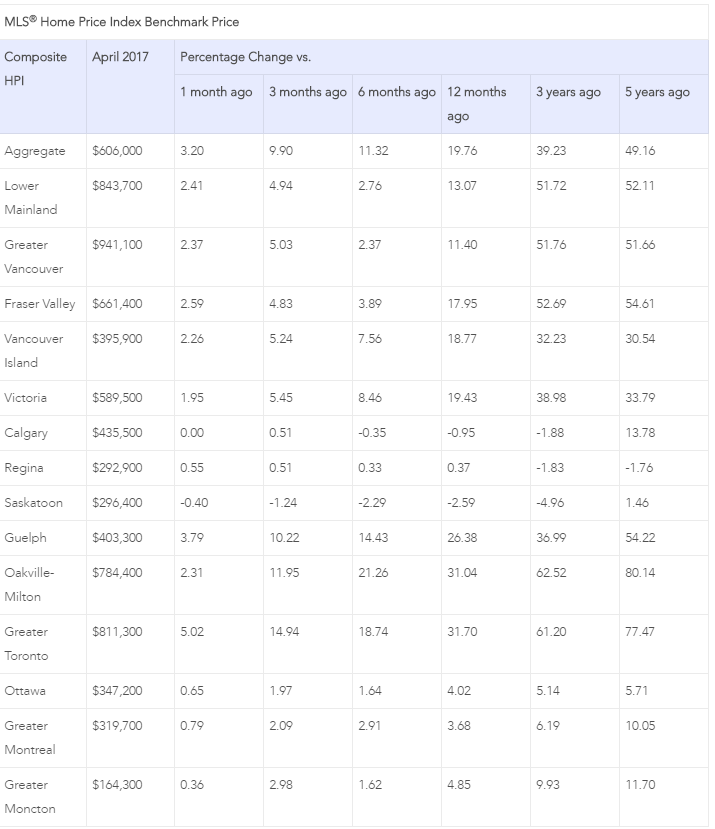 Canada’s economy generated virtually no net new job growth in April, on the heels of a multi-month employment rally that was the strongest in years. Employment has now increased in 15 of the last 17 months with growth over the last year averaging a solid 23,000 per month. The details of the monthly report for April were mixed (with a sharp pull-back in full-time jobs offset by stronger part-time employment) but, on average, more than two-thirds of job gains over the last year have been full-time.

Employment grew by just 3,200 jobs last month, well below the 10,000 forecasted by economists. On a year-over-year basis, however, there were 276,000 more people employed–up 1.5%–and the jobless rate was down 0.6 percentage points. Other positive signs include hours worked numbers that show gains of 1.1% over the past 12 months.

Despite the slowdown in job growth in April, the unemployment rate fell 0.2 percentage points to 6.5%, its lowest level since October 2008. According to Statistics Canada, the decrease reflected the departure of 45,500 people from the labor force. About half of those were youth, meaning many young people looking for work have stopped looking.
Employment among the population aged 55 and older rose by 24,000 in April, mostly in full-time work, and their unemployment rate declined 0.6 percentage points to 5.6%. On a year-over-year basis, people 55 and older had the fastest rate of employment growth (+3.6% or +133,000) compared with the other demographic groups. This is primarily the result of the continued transition of the baby-boom cohort into this older age group.

Among women aged 25 to 54, employment held steady in April and their unemployment rate was little changed at 5.1%. Compared with 12 months earlier, employment for this group was up 71,000 (+1.2%), virtually all in full-time work.

Employment for youth aged 15 to 24 was little changed in April, while their unemployment rate fell 1.1 percentage points to 11.7% as fewer of them searched for work. This is the lowest unemployment rate for youth since September 2008. On a year-over-year basis, youth employment was virtually unchanged.

Employment rose in British Columbia and Prince Edward Island, while it was virtually unchanged in the other provinces. In B.C., employment rose by 11,000 last month and the jobless rate was little changed at 5.5%. Job creation has been on a upward trend in the province with sizable increases in four out the past five months. On a year-over-year basis, employment was up 3.4% in B.C.

Although employment held steady in Ontario, the unemployment rate fell 0.6 percentage points to 5.8%, largely due to a decline in the number of youth searching for work. This is the lowest jobless rate for Ontario since January 2001.

In Alberta, April saw little job gain after a period of growth that began in autumn 2016. The jobless rate in the province was 7.9% in April, down 0.5 percentage points from the previous month as fewer people searched for work.

More people were employed in educational services, health care and social assistance, and transportation and warehousing in April. At the same time, employment declined in business, building and other support services, as well as in accommodation and food services.

Yet, the pace of annual wage rate increases fell to another record low. The pace of annual wage rate increases for permanent employees fell to 0.5% in April, the lowest in records dating back to the late 1990s. The wages puzzle, which has been cited by the Bank of Canada as evidence of slack in the economy, persists. The weak wage growth is in sharp contrast to what would otherwise appear to be a labour market with little or no slack remaining. To be sure, other measures of wages have been stronger (wage growth in the alternative (lagged) Survey of Employment, Payrolls and Hours (SEPH) was 2.4% year-over-year in February) but weaker numbers today from a wage perspective will likely continue to worry the Bank of Canada.

For historical perspective, wage gains have averaged 2.7% over the past decade. Adding to the mystery is that Ontario is the major source of wage sluggishness, with pay increases of 0.2% year-over-year. Full-time jobs also are showing slower wage gains than the national average. Clearly, businesses are very cost conscious, keeping labour costs muted, and economic uncertainty continues to depress the willingness of workers to demand higher wages. This concern can only be enlarged by growing trade tensions between the U.S. and Canada as President Trump continues to threaten to renegotiate NAFTA, already imposing punitive duties on soft wood lumber imports from Canada.

Trade tensions as well as a decline in oil prices to $45 a barrel (WTI) and the continuing troubles with Home Capital have added to downward pressure on the Canadian dollar as it has suffered the weakest performance of any of the Group of Ten currencies, now trading at 72.7 cents U.S.

U.S. Job Growth Rebounds and Jobless Rate Falls to Lowest Level Since May 2007

U.S. payroll gains rebounded in April by more than forecast and the jobless rate unexpectedly fell to 4.4%, signaling that the labor market remains healthy and should support continued increases in consumer spending.

The 211,000 increase in nonfarm payrolls–beating economist forecasts–followed a 79,000 advance in weather-depressed March that was lower than previously estimated. The recovery in employment was most evident in private sector, service-producing jobs.

While the jobless rate is now the lowest since May 2007 (see chart below), wage increases did moderate slightly in April but is still indicative of real wage gains. This continued support to household incomes should contribute to Q2 consumer spending growth, and overall Q2 GDP growth, which is likely to rebound to over 2.5% following a disappointing first quarter increase of only 0.7%. Average hourly earnings, the main wage measure in the report, rose an expected 0.3% though this did not prevent the year-over-year rate from moderating slightly to 2.5% from 2.6% in March and a Q1 average of 2.7%.

Strengthening U.S. business confidence might be translating into hiring, and the data should keep Federal Reserve policy makers on track to raise interest rates in the coming months after officials declared this week that the first-quarter slowdown is likely to be transitory. The Fed refrained from raising rates this week.

If you have not yet found yourself skimming the news online today, you may not have heard yet about the Provincial Government’s announcement regarding the Ontario Housing and Rental Markets.

The Provincial Liberal Government, laid out for the Province their plan to address issues in key aspects of the Real Estate and Rental Property Markets in the Province. There were 16 steps in total, however for this post, we are going to focus solely on the announced changes that deal directly with Rental Properties and Landlords. These changes may directly impact those of you who have or plan to acquire rental property. (Keep in mind that these were just announcements and many of them will have to be passed in the legislature before officially becoming law, although passing is highly likely).
Click HERE To Read More