Some of the last round of changes from the government regarding qualifying for a mortgage were that if you have a balance on your unsecured line of credit, then to qualify for mortgage the lenders require that we use a 3% payment of the balance of the line of credit.

Simple math is, if you owe $10,000 we have to use $300 as your monthly payment regardless of what the bank requires as a minimum. Given that the banks hand out lines of credit on a regular basis it is not uncommon for us to see $50,000 lines of credit with balances in the $40,000 range. That amount then means we have to use $1,200 a month as a payment even though the bank may require considerably less.
CLICK TO READ MORE

To get out of debt, you need a plan, and you need to execute that plan. That’s why I’ve created this simple, five-step, get-out-of-debt checklist that can help you leave that financial burden behind you.
As you work on your plan, you’ll need to make all necessary adjustments to your budget along the way so you don’t overspend and slide back into debt. Plus, if you don’t have an emergency fund, consider setting some money aside in savings beforehand.
Keep this checklist someplace where you’ll see it often (like your refrigerator door), and make it your goal to check a task off the list each day (or each week), depending on how quickly you want to become debt-free.
CLICK TO READ MORE

As we said last month, April is usually the start of a spring housing market ramp-up, but this year the new mortgage stress test and rising mortgage rates have continued to be a negative factor. Those expecting an early-stage pick-up marking an end to the payback for sales pulled forward into the fourth quarter of last year have been sorely disappointed. With another month of data released by the Canadian Real Estate Association (CREA) on Friday, it is evident that the disappointing housing picture continued in May. There is no indication of any real rebound in home resale activity through May.

National home sales via the Canadian MLS Systems remained little changed from April to May. Having slipped 0.1% lower, it marked the lowest level for national sales activity in more than five years. Slightly more than half of all local housing markets reported fewer sales in May compared to April, led by the Okanagan region, Chilliwack and the Fraser Valley, together with the Durham region of the Greater Toronto Area (GTA) and Quebec City. Declines in activity were offset by gains in Calgary, Thunder Bay, Brantford, London and St. Thomas, Oakville-Milton and the Quinte Region west of Kingston. A small increase in GTA sales also supported the national tally.

On a positive note, sales have stabilized suggesting that buyers could be adjusting to the impact of tighter mortgage rules and higher interest rates. After all, sales did climb 1.6% in Toronto, after falling to recession-era lows in April.

Existing home sales in Canada remain stuck at a six-year low of 436,500 units on a seasonally adjusted annualized basis in May, representing the fifth consecutive monthly decline. The stress test, along with higher mortgage rates and new market-cooling measures in British Columbia continue to keep homebuyers on the sidelines. Not even a material rise in new listings (up 5.1%) enticed them back into play. Activity was at a virtual standstill last month in all three of Canada’s largest markets— Vancouver, Toronto and Montreal.

Actual (not seasonally adjusted) activity was down 16.2% compared to May 2017 and reached a seven-year low for the month. It also stood 5.5% below the 10-year average for the month of May. Activity came in below year-ago levels in about 80% of all local markets, led overwhelmingly by those in and around the Lower Mainland of British Columbia and the Greater Golden Horseshoe (GGH) region in Ontario.

“This year’s new stress-test became even more restrictive in May since the interest rate used to qualify mortgage applications rose early in the month,” said, Gregory Klump, CREA’s Chief Economist. “Movements in the stress test interest rate are beyond the control of policymakers. Further increases in the rate could weigh on home sales activity at a time when Canadian economic growth is facing headwinds from U.S. trade policy frictions.”

New Listings
The number of newly listed homes rose 5.1% in May but remained below year-ago levels. New listings rose in about three-quarters of all local markets, led by Edmonton, Calgary, Montreal, Quebec City, Ottawa and the GTA.
With new listings up and sales virtually unchanged, the national sales-to-new listings ratio eased to 50.6% in May compared to 53.2% in April and stayed within short reach of the long-term average of 53.4%. Based on a comparison of the sales-to-new listings ratio with its long-term average, about two-thirds of all local markets were in balanced market territory in May 2018. There were 5.7 months of inventory on a national basis at the end of May 2018. While this marks a three-year high for the measure, it remains near the long-term average of 5.2 months. 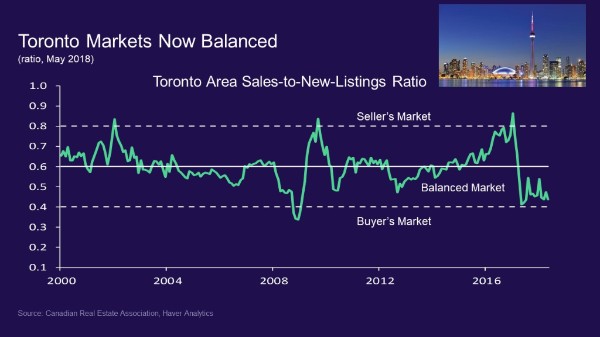 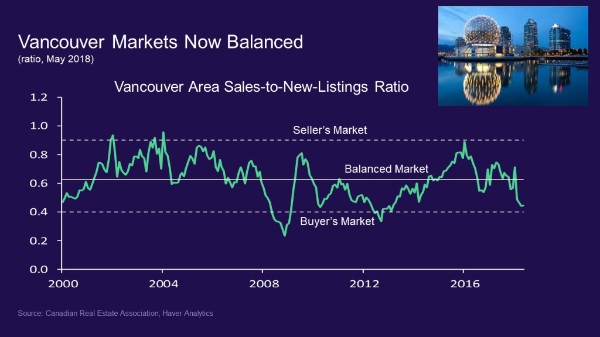 Home Prices
On a national basis, the Aggregate Composite MLS Home Price Index (HPI) rose only 1.0% y/y (year-over-year) in May 2018, marking the 13th consecutive month of decelerating y/y gains. It was also the smallest annual increase since September 2009.
Decelerating year-over-year home price gains largely reflect trends among GGH housing markets tracked by the index. While home prices in the region have stabilized and begun trending higher on a monthly basis, rapid price gains recorded one year ago have contributed to deteriorating y/y price comparisons. If recent trends remain intact, year-over-year comparisons will likely improve in the months ahead.
Condo apartment units again posted the most substantial y/y price gains in May(+12.7%), followed by townhouse/row units (+4.9%). By contrast, one-storey and two-storey single-family home prices were down (-1.5% and -4.7% y/y respectively), very much in line with what we saw last month.

Within the GGH region, price gains have slowed considerably on a y/y basis but remain above year-ago levels in Guelph (+3.8%). By contrast, home prices in the GTA, Oakville-Milton and Barrie were down from where they stood one year earlier (GTA: -5.4% y/y; Oakville-Milton: -5.9% y/y; Barrie and District: -6.3% y/y). This reflects rapid price growth recorded one year ago and masks recent month-over-month price gains in these markets.
Calgary and Edmonton benchmark home prices were down slightly on a y/y basis in May (Calgary: -0.5% y/y; Edmonton: -0.9% y/y), while prices in Regina and Saskatoon were down more noticeably from year-ago levels (-6.2% y/y and -2.7% y/y, respectively).

Bottom Line
Housing markets continue to adjust to regulatory and government tightening as well as to higher mortgage rates. The speculative frenzy has cooled, and multiple bidding situations are no longer commonplace in Toronto and surrounding areas. Home prices in the detached single-family space will remain soft for some time, and residential markets are now balanced or favour buyers across the country. The hottest sector remains condos where buyers face limited supply.

Owing to the housing slowdown, a general slowing in the Canadian economy and significant trade uncertainty, the Bank of Canada has taken a very cautious stance. However, at their last meeting, monetary policymakers have signalled that a rate hike is coming, likely when they next meet on July 11.
Five-year fixed mortgage rates have already risen roughly 110 basis points, while rates for new variable mortgages rose by close to 40 basis points. Since the implementation of new mortgage standards, nonprice lending conditions for mortgages and home equity lines of credit have also tightened.

In the Bank of Canada’s recently released Financial System Review, the central bank analysts observed that the updated Guideline B-20, which took effect at the beginning of this year, “is dampening credit growth and improving the quality of new mortgage lending, especially in regions with the highest house prices. For example, because of the new mortgage interest rate stress test, the size of a 5-year, fixed-rate mortgage with a 25-year amortization that a median-income borrower in Canada can qualify for dropped by about $82,000 to $373,000. The stress test will have more significant effects in markets such as the Greater Toronto Area (GTA) and Greater Vancouver Area (GVA), where house prices are higher relative to incomes and low-ratio mortgages are more common. 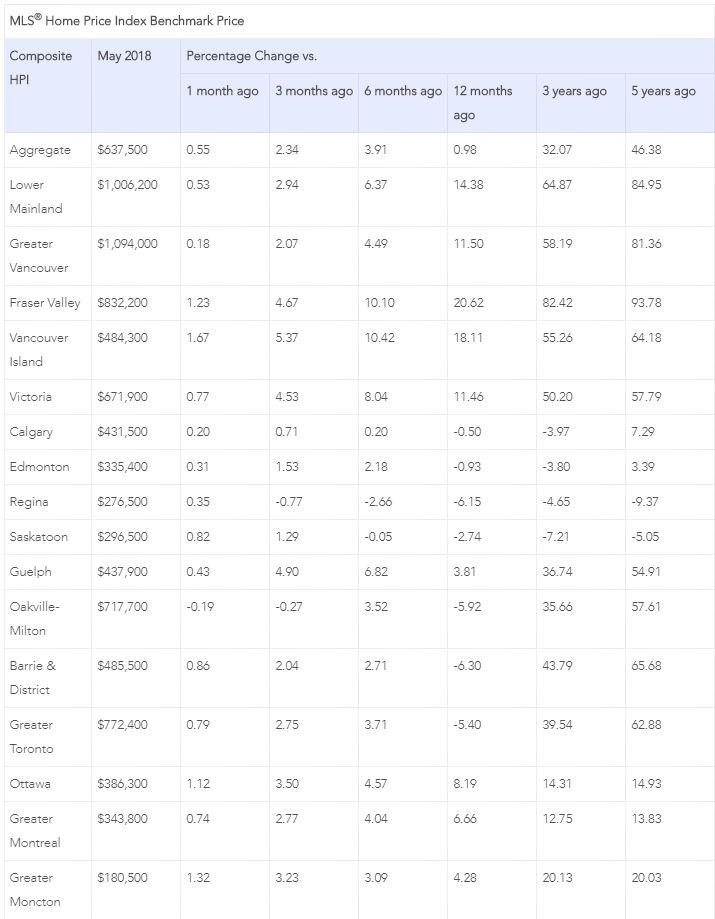